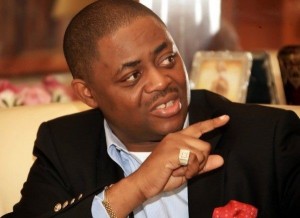 The Independent National Electoral Commission, INEC, had declared President Muhammadu Buhari winner of the presidential election after he got 15, 191,847 votes to defeat his main rival, Atiku Abubakar of the Peoples Democratic Party, who polled 11,262,978.

Following his victory, Buhari in his acceptance speech, urged his supporters to be modest in their celebration, urging them not to “gloat” over his victory.

Despite his appeal, wild celebrations greeted Buhari’s victory across the country.

However, Fani-Kayode condemned the celebration of Buhari’s victory, stressing that something was fundamentally wrong.

In a tweet, Fani-Kayode wrote: “There is something fundamentally wrong with a culture and people that encourages its youth to jump into and swim in a filthy, stinking, maladrious, shit-filled gutter to celebrate Buhari’s declaration of victory by INEC.

“I cannot fathom what makes these people behave in this way.”