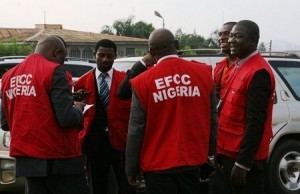 There is palpable fear among internet fraudsters in Ibadan, Oyo State following the mode at which the Economic and Financial Crimes Commission has been harvesting their colleagues with precision.

Some of the internet fraudsters have alleged that the EFCC agents might be tracing their locations via their Wi-Fi connections. This has forced several young men engaged in the criminal act to adopt the usage of ‘dongles’ in surfing the internet with their laptop computers.

Multiple sources contacted by Tori News explained the usage of Wi-Fi facilities to access the internet makes the sting operations of the crack teams easier.

A source said; “Sincerely, I don’t know how it works; its like a rumour on the streets that the EFCC is tracking the boys through their Wi-Fi connections. A friend who is versed in information technology even confirmed to me that it is very possible. He said they will hack into your network and breach your internet privacy”

Another source also revealed to a correspondent that he has gone broke due to inability to ‘work’ amid the fear of arrest by the EFCC. He complained that he has been technically hiding to evade any possible arrest.

“Things are hard presently, we (Yahoo Boys) can’t work freely and make money. I haven’t been able to use my Wi-Fi connection to prevent getting into trouble. For now, I have left my house for that of a friend which is more secure for now. The raids have refused to stop and the development is worrisome” he said.

He explained that he has been able to use the Wi-Fi connection of a new generation bank close to his home but the major challenge is that the internet speed is very poor when connected to a laptop device.

The Ologun Eru area of the Ibadan North-west zone which is close to the Eleyele axis is a developing area in the city with new buildings being erected. The population is a mixture of the rugged people and a few enlightened ones. It used to be serene and peaceful with several Yahoo Boys safely taking refuge there to prevent the prying eyes of security operatives.

Today, it has been receiving the regular and unwanted visits of EFCC operatives accurately hunting for Yahoo Boys using the street as their hideouts.

Many Yahoo Boys in other environs within Ibadan have also ditched their flashy cars at safe places as they move around town using public transport.

Others have also been moving around town with spare phones which are devoid of incriminating scam materials in order not to be caught in the web of the ‘Stop and Search’ exercises by EFCC operatives.

Due to the menace of unemployment which is pegged at 23% presently, thousands of Nigerian youths have been actively engaged in all manners of internet fraud with the discreet ones using other businesses as fronts to cover up their shady activities.