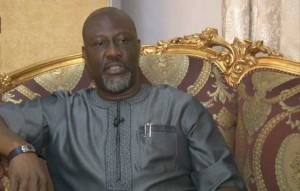 The Peoples Democratic Party (PDP) has raised an alarm regarding the safety of Senator Dino Melaye, even as the police continue its siege on the residence of the lawmaker representing Kogi West in the Senate.

PDP said by the continued lockdown on the residence of Senator Dino Melaye by the police, “the Muhammadu Buhari Presidency is turning Nigeria into a police state, where those opposed to President Buhari’s re-election are treated like enemies of the state”.

This is according to a statement by Kola Ologbondiyan, spokesperson of the PDP Presidential Campaign Organization.

The PDP condemned the siege on Melaye’s residence describing it as “unwarranted and provocative”.
According to the PDP, the siege shows that “the police under President Buhari, has become an instrument of oppression to subjugate dissenting voices ahead of the 2019 general election”.

PDP said the only sin committed by its Presidential Campaign Director of Civil Societies, Senator Melaye, is his return to the PDP and his forthright stand against the “misrule of the Buhari administration, which is all well within his rights as a citizen”.

The party claimed that since Senator Melaye, left the APC, the Buhari administration has continued to hound and harass him, as well as the members of his family with trumped up charges, all aimed to silence and put him out of circulation ahead of the 2019 general election.

Expressing worry over the safety of Senator Melaye and his family members, the party said President Buhari and the All Progressives Congress (APC) are to be held responsible should any harm befall Melaye or any member of his family.

Melaye had recently claimed that the police planned to arrest and inject him with a poisonous substance.

The PDP said it “hopes that opposition figures such as Senator Melaye will not suddenly become victims of ‘accidental discharge’, unexplained assassinations or mysterious motor accidents as move on to the general elections”.

or better not to think about it ))

Your way of explaining everything in this article is in fact good, ...